‘To spend a day with my wife was so special to us, we don’t get to do it too often.’
January 9, 2018
by Taya and Chris Kyle Foundation 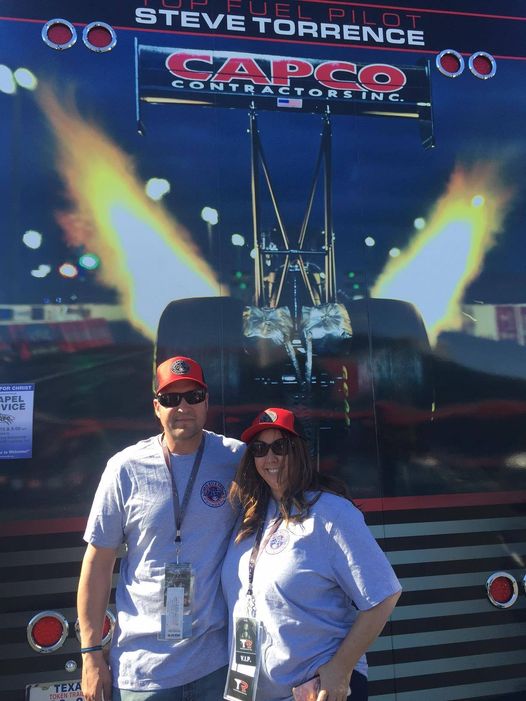 When you think Las Vegas, NV you think the bright lights of The Strip, crazy hotels, good times and chancing your arm at a Casino. It’s a place of guilty pleasures and escapism.

You certainly don’t see it as becoming the home of America’s worst gun tragedy. Sadly, on October 1, 2017, it was exactly that when a gunman opened fire from a hotel on an open air concert.

Many off-duty first responders at the concert were hailed for their bravery in stepping in to help those in the firing line, putting their own bodies on the line and their own significant others at risk. The first responders that were serving at the event on the night and the city in the days and weeks directly after the event had to wade through the uncertainty to secure and re-assure the community.

Soon after, through a partnership with America’s leading mobile hydraulic and industrial hose supplier – PIRTEK USA – and NHRA Mello Yello Series front runner, Steve Torrence, the Chris Kyle Frog Foundation had the opportunity to provide experiences to Police Officers from the Las Vegas Metropolitan Police Department at the Fall round of the NHRA held at Las Vegas Motor Speedway’s The Strip.

The Chris Kyle Frog Foundation’s Date Night Out program gives couples that serve either in military or first responder units the chance to experience time off and allow someone else to serve. CKFF has found since implementing Date Night Out that most of the couples that take part haven’t had time off – in many cases – for years.

LVMPD Officer Richard and his Wife Karen were a couple that joined CKFF and Steve Torrence Racing at The Strip.

Richard is one of the many that have continued their life of service after a military career. He is a veteran of two international tours as a USMC officer and is now with the Vegas Police.

“It had been months since Karen and I have been on a date,” said Richard. “Karen’s never been to an NHRA drag racing event before – I have many years ago – but it was nothing like this!”

The couple based themselves in the Torrence Racing pit area and ate with the team before being taken down to the most ferocious live experience in world sport – standing on the startline as Steve’s nitro-methane fuelled dragster explodes away from the line.

“I knew of the Chris Kyle Frog Foundation, but wasn’t too aware of what they actually did,” said Richard. “Karen and I have been married for 17 years now and there are pressures on the marriage that come with serving in the military and as a law enforcement officer.”

The Chris Kyle Frog Foundation provides these experiences to couples around the nation through nominations via its website. The Foundation – a 501c3 registered organization – is funded through personal donations, sales of licensed products through select retailers and its online store and corporate partners – like PIRTEK USA – who contribute to supplying Revitalization Retreats and Date Nights Out.

“Just to have the chance to spend a day out with my wife was so special to us, we don’t get to do it too often.”

“Thank-you so very much for allowing me to take my wife on a date tonight. This will be etched in our memories for a lifetime. Thank you for keeping Chris’ memory alive and doing wonderful events like tonight.”

“We had such a great time, we’ll cherish it forever.”

The Chris Kyle Frog Foundation was launched on Veteran’s Day in 2014 by Taya Kyle in honor of her husband, the American Sniper, Chris Kyle. It was established to provide support to service marriages in first responder and military communities.